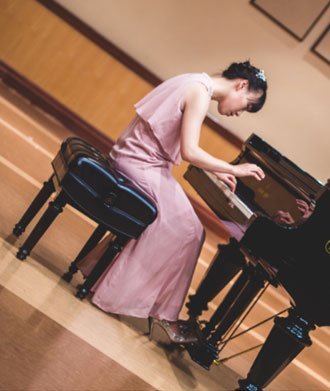 A native of Taiwan, Ms. Connie Tu has appeared as a solo and collaborative pianist in
multiple chamber settings with string quartets, woodwind trios and brass quintets. Some of
her recent achievements include the silver medal for the MTAC Romantic/Impressionist
Festival, first place for the CAPMT Sonata Festival, and 4th place for the MTAC Concerto
Competition. Additionally, Ms. Tu performed a number of showcase recitals at the Salmon
Recital Hall at Chapman University, including a full solo graduate recital.

Her recent appearances include chamber music concerts at both Mt. San Antonio College
and Chapman University. Her ensemble experiences include playing with the Mt. SAC
Orchestra, Chapman University Wind Symphony, and The Chapman Orchestra, where she
was featured in the school’s annual Wassail concerts. The concerts were broadcasted on
KCET television nationwide. She is also featured in the film A Children’s Song as a pianist
double, and interviewed with the toy commercial company, PomPomWow. She has also
appeared as guest pianist for the Roomful of Pianos debut showcase at the NAMM Show
since 2018 for two consecutive years.

Ms. Tu has participated in a number of Master Classes. She has worked with renowned
pianists such as Vicki Ray, Jeffrey Siegel, Jacqueline Petitto, Kirill Gliadkovsky, Eugene
Alcalay, Kevin Fitzgerald and Antoinette Perry. During the summer of 2016, she was
accepted and offered scholarship to work with esteemed professors and artists in the
Semper International Music Festival in Schlern, Italy. Such artists included Dr. Grace Fong
and Dr. Karen Follingstad.

Ms. Tu obtained a Bachelor of Music degree in Piano Performance from Chapman
University and is currently pursuing a Master of Arts in Teaching

My son has been taking piano and guitar lessons for more than a year. He loves his teachers and I can tell that they really care about my kid too. Your music school is wonderful and I highly recommend.
Louise Flores

I am so grateful my son’s guitar teacher not only makes learning fun but also shares his knowledge for music. I could not have found him a better place to learn guitar.
Martin Wood